I’ve been reading a lot of John Hagel’s work recently, appreciating both his writing style and more importantly, the ideas that he generously shares with the world. John’s new book, “The Journey Beyond Fear“, was published last week & is on my reading list.

In this blog post, John again outlines the three components of the “passion of the explorer” (he’s written and spoken extensively about this subject), & urges everyone to discover their own:

The passion of the explorer is something that we all have within us, waiting to be discovered and nurtured. If we want to make the journey beyond fear, we need to make the effort to find that passion and pursue it, not just on nights and weekends, but in our day jobs. It will help us to turn a world of mounting performance pressure into a world of exponentially expanding opportunity

Throughout the AltMBA, a recurring feedback I had, that despite my oft-used crutch that English is not my first language, the assumptions I have about opportunities & the self-imposed constraints were invalid. My writing was “easy to read”, I “already have a voice, use it”, I have “a way with words” were some of the comments I received on my writing. The challenge for me: How could I reframe the problem or the situation so I could see the options?

I was mulling over this question driving home one night. The car radio was locked on our local country music station. The presenter was having a ball, talking about the music he was about to play for his captive audience. It’s funny how the mind works: I remembered immediately of “Pedro”, the presenter on the morning show, who seemed to have gone off air for a while now.

The next morning, I was on the radio station’s website to see if I could find out if his segment / time had changed.  That was when I saw an advertisement pop-up: “Volunteers required for administration of the station”. Things seemed to connect in my mind, radio – music – voice – volunteer – community. Feeling excited, I dashed off an email offering to help, using their “contact us” form.

Two weeks went by, & I hadn’t heard back. “Their move” is my default response to most things after I’ve taken the first step – “let them take the next step”.   To my bad luck, the echoes in my head, the words in my writing have all been saying the same thing: “examine your assumptions, examine your narratives”.

There were several alternatives for the radio silence – pun intended. There didn’t actually have anyone reading the emails. The email may not even have been delivered. The person responsible for correspondence didn’t get my mail. And so on. So I followed it up with an email from my mailbox, gently reminding that I had volunteered, & was hoping the lack of response was because they didn’t need my help.

That email got an immediate, apologetic response: the secretary was away for the next two or so weeks, and could we meet in the radio studio office on a Sunday morning to talk about how I could help. Finally a response! And child-like excitement: the last time I was in a radio station studio was 38 years ago, a chance visit thanks to my uncle singing Christmas carols on the radio. 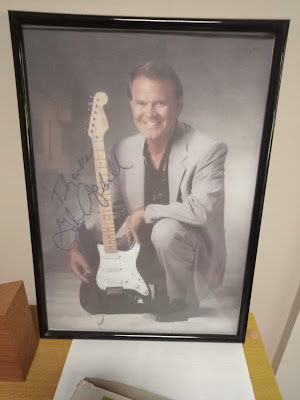 That Sunday morning was yesterday.
I spent three hours at the studio, overlooking the beautiful waterfront. It was a surreal experience:  listening to the presenter both on the radio & in person, loving the music he was playing, & learning what needed to be done around the studio. The gentleman was multi-tasking: mentoring a new presenter, operating the playlist, talking to me about the station’s history & the generosity of the local community, the challenges of running a community radio station. I was mesmerized by how smoothly he went from frantic activity around the office to a calm, soothing voice on the radio, & told him so.  I felt at home in the tiny studio, enjoying the conversation & the music. Oh, & among the memorablia on the walls, I found this picture of Glen Campbell. I’ve been blown away with his rendition of “Gentle on my mind“

I’ll be at the station next Sunday, helping however I can. Maybe I’ll even get to host a show 🙂

You could hear the child’s screaming above the loudspeaker blaring announcements.

He was 7 or so, dressed in the event-issued jersey, looking like the 1200 other kids taking part at the annual TRYathlon event.  He was lost & terrified. Worst of all, he didn’t know how to find his mother.  A volunteer kneeled down beside him, trying to pacify him, & to walk him to the information marquee that was just a few metres away.

Two other things also happened simultaneously. The compere’s voice, calmly, announced that a mother was looking for her lost child.  The mother, wailing as loud as the child, with another little crying bub in her arms, rushed out of the crowd, from the direction of the information marquee.

The tears & the wails continued loudly, but this time in happiness at the family reunion.

I saw them a little while later. The young fellow, with an ice-cream in his hand, sweat on his brow, and a medal around his neck,  was beaming from ear to ear at having completed his first ever TRYathlon. So was his mother.  Neither looked frightened.

I have fear. Of various things. & in various degrees.

Of what?  I am unable to define.

Making a fool of myself? More likely.

That I will be refused? That too.

I called him. The phone rang. Several times. & he didn’t answer. I felt a sense of relief! I didn’t have to meet him!

My usual response is to wait . Give myself excuses. Maybe he is busy. Maybe he doesn’t want to talk to me. Maybe the role is already filled. All sorts of weird & wonderful excuses.

This time round, I did something radically different.

I sent him a mail, asking to see him. Can’t wriggle out of that now.

I will call him again tomorrow.  Talk to him about the problem he wants solved. Who doesn’t have a problem he can pass off to someone else to solve? What have I to lose?