I didn’t get a picture today: on our way back from the walk, the skies opened up.

Our ten-year old was on his bike, riding along slowly and grumpily as we walked. The trip back suddenly became a fun experience, getting wet as it was getting dark.

Walking in the rain was a trip back on memory lane too. Two decades or so ago when we were dating, come sunshine or rain, my wife and I would meet every day. On the days it rained, which was quite often given the weather there, we’d get drenched – and would come up with creative excuses for her when she got home.

Also reminded me of this wonderful tune that I’ve shared a couple of times before: Pt’s Shiv Kumar Sharma & Hariprasad Chaurasia Walking in the Rain.

Always take the weather with you.. – Crowded House 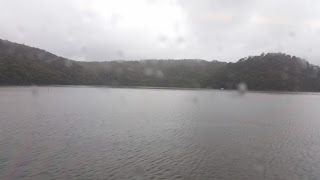 It’s been bucketing down for the last 24 hours. The forecast says two more days of this. There have been flash floods reported, and half the extended holiday period for some people is now guaranteed to be spent indoors.
The weather is making me nostalgic about my pre-teen years.
The smell of freshly deep fried jackfruit papads.
The sound of rainlashing on clay tile roof.
The mesmerising patterns of water flowing off the roof onto the ground, leaving tiny conical impressions on the soft red soil.
Card & board games with my sister.
Curling up on a bench with a rug & a hot cup of milk.
More often with a grown-up kind of book that would take days to read at regular pace.
The nights would be spent in the light of a flickering candle or a kerosene lamp, hearing stories from our parents about their childhood.
Occasionally having my grandparents would be over. Grandma would tell us tales about the house she grew up in, which was the house we were living in at the time. Pets around the house. A mini dairy farm. Wild animals roaming freely at the periphery of the compound. A tiger or leopard occasionally making off with one of the animals.   Stories about lightning strikes as we looked out at the not yet dead coconut tree in the front yard. And stories about the tenants who lived in the now damaged huts.
Exploring the rooms in the (what seemed like) enormous house, a portion of which were strictly off-limits to us children.
Off-limits not because of the treasures they contained (they did), but because of structural damage to the walls.
It was a magical time because there was so much to do even when you were stuck indoors, without a radio, or a TV or an internet connection.
Somehow, as we grow older, that magic is lost.
The rains become an inconvenience.
We get drenched. Roofs leak. Things get wet. Sometimes to the point of being unusable.
Transport services are delayed.
We can’t get to our important / urgent meetings on time. Or without looking like we just got out of the shower.
Clothes don’t dry as fast. And perfume can’t / won’t suppress the smell of damp clothes.
Some type of screens provide a distraction. Rarely does the power go out.
Sometimes, we are reminded that we aren’t in control.
All those memories came flooding as I watched Mother Nature showering (or drowning) her children with unrequited liquid love.