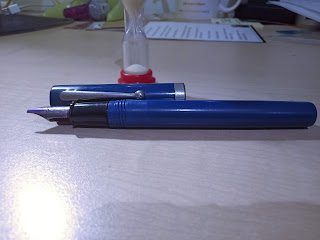 This pen is about 25 years old.
It has been one of my best teachers.

Fountain pens were the only writing instruments allowed at school, & so my parents got me a couple of cheap ones. I was fascinated with italic calligraphy back then, & had no access to broad nibs. The only nibs available then were fine nibs. Fountain pens have a way of falling out of the hands of a 12 year old when the cap is unscrewed, often landing nib first on the ground. If the (sometimes deliberate) damage to the nib was bad, I’d use a pair of pliers to break them, and scratch them on a mirror, trying rather unsuccessfully to make them smooth & make it into a broad nib for italic writing.

When my dearest aunt got me this Shaeffer italic calligraphy pen as a gift, I felt like the richest person on the planet. Until then, I had only seen one of the kids in my class brandish his calligraphy pen, one he would not allow anyone to touch, let alone write with.  So when I became the proud owner of this pen, the first words I wrote with it were “Thank you”. For the next decade & a half, I wrote with this pen nearly every day. Whether it was during my exams, for birthday & Christmas cards, love notes or just random scribbles, it was my constant companion.

No pen writes the same. Writing cursive with an italic calligraphy pen is a fun exercise. I learned how to hold it at the proper angle to the paper to make the smoothest mark. There is no single grip that lets you write every stroke well so I learned how to adapt at speed.

Calligraphy, among other things, is about consistency. Training the hand & the eye to work in tandem at speed requires millions of repetitious exercises. As a teenager (& even as an adult), I hated repetition because it’s boring. It’s only when I realised that while I was doing inconsistent marks on the page that it dawned on me to go back to the basic lines & ovals that make up every letter of the cursive alphabet. And do them millions of times over the years.

This pen leaks. Runs out of ink. Needs to be cleaned. The barrel has cracked. It’s easy to discard it & get a new one, especially now that I can afford it.

But I won’t.
Because it is a reminder of many things.
That you can change someone’s life with a simple meaningful gift, like my aunt did for me.
That like pens, people too are different. Each one requires to be handled differently if they have to make their best mark in this life. This is even more true when I’m a leader, whether at work or out of it.
That persistence, purposeful practice is the only way to mastery. And while you may appear to be very good at what you do,  there’s still room to improve. Lots of room.
That everything grows old, cracks & leaks, & runs out of ink (or steam). Especially your body.